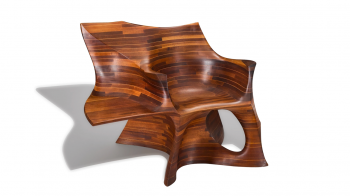 Jack Rogers Hopkins’s (1920-2006) visionary environmental furniture, sculpture, ceramics, and jewelry works are idiosyncratic, experimental, and finely crafted. The dramatic organic shapes he employed suggest the sandstone cliffs and ocean waves of Southern California where he lived and worked. Hopkins was recognized during his lifetime and included in national design shows with fellow luminaries such as Sam Maloof and George Nakashima. Hopkins’s bespoke furniture is included in museum collections such as the Boston Museum of Fine Art (MFA) and the Los Angeles County Museum of Art (LACMA). Examples also appear in important design galleries and in fine 20th Century design auctions. The Sam Maloof Foundation will host a Hopkins show in the Spring of 2024.

Hopkins is included in a small circle of fellow California studio designer-craftsmen such as Art Carpenter, J.B. Blunk and Sam Maloof who have emerged as the most influential West Coast studio makers of their generation. Exhibited nationally during his lifetime, Hopkins’s daring sculptural forms have earned him a permanent place in the history of the mid-century American Studio Craft Movement.  Hopkins famously destroyed his own masterpiece, the Womb Room, and it is an intriguing part of his personal story, and a riddle well worth solving. What was it about his worldview that enabled him to undertake such an act?

Screening as part of  this presentation, will be the world premiere of Jack Rogers Hopkins: California Design Maverick, a documentary film directed by 20th Century design specialist Katie Nartonis. (20 min).  Nartonis’ documentary In Tandem: The Life and Work of Jerry and Evelyn Ackerman was screened by MW at the Annenberg Theater in 2020.

After the screening, Nartonis will be joined by her co-authors of the 2020 Hopkins book - co-editor Jeffrey Head, and noted design specialists Jo Lauria, Dave Hampton, and Glenn Adamson, for a discussion hosted by Reform gallery owner, Gerard O’Brien.